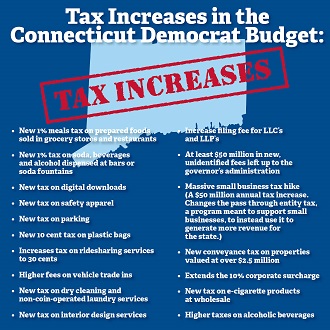 Late Sunday night (June 2nd), the Lamont Administration finally released a full draft of the 567-page state budget. It was negotiated behind closed doors, without including Republican leadership or ideas. The CT House of Representatives passed the budget, about 24 hours after the full 567-page document was released, on a vote of 86-65, with all Republicans and some Democrats voting against it. The CT State Senate passed the budget on a vote of 20-16. I, along with all my Republican colleagues, voted against this budget. Now, we find ourselves facing hundreds of millions in new revenue being collected by the state out of your pockets ($861.5 million in 2020, $921.3 million in 2021).

What is truly unfortunate about this budget is that it is not a strict budget document, but also includes multiple policy proposals the Democrats wanted to implement but could not get done through the legislative process. Some never received a public hearing and had no input whatsoever from the people and businesses that will be hit hardest.

You can see a list of new and expanded/increased taxes in the accompanying graphic.

In addition to new and increased taxes, the Governor and the Democratic majority have decided not to reduce government spending, but to cut some of the crucial social services we offer instead. This budget removes cost of living increases for aid to the disabled (cutting $1.5 million), temporary family assistance for neediest families with children (cutting $4.2 million), SAGA which supports individuals who are unable to work for medical reasons (cutting $1.1 million), aid to the blind (cutting $9,100), and Old Age Assistance funds which go to seniors, the blind or people with disabilities (cutting $680,000).

Instead of cutting government spending, this budget reduces promised funding for those most in need.
It also “diverts” millions from the Special Transportation Fund ($58.2 million in 2020, $113.2 million in 2021), despite the Constitutional “Lock Box” that prevents money from being taken out of the fund. They argue that they are taking it before the money is actually deposited into the fund. So it’s legal, just disingenuous. So much for the “Lock Box”.

This budget has no real vision for the future of our state. It raises revenue rather than cuts spending. It pushes more costs onto future generations and will disproportionately affect the middle- and working-class people of our state.