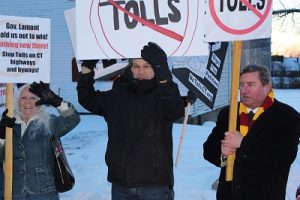 At the February 19th meeting of the Enfield Town Council, a resolution against tolls was presented and voted on and the Republicans were the only ones who voted AGAINST tolls that night.

“I’m definitely against tolls,” said Enfield resident Joe Albert during public communications.  “For Town Council members who said that tolls aren’t going to come here, I think you’re wrong… It came out of his (the Governor’s) mouth.  It’s gonna happen… If you want to keep businesses in this State, vote no on tolls and tonight vote yes for this resolution.”

Jonathan LeBlanc agreed.  “I’m going to be graduating college this year,” said LeBlanc.  “I look at it (tolls) and I think whether it’s tolls or a tax on groceries or a tax on pharmaceuticals, it’s scaring a lot of people in my generation.” He continued, “What’s scaring a lot of people away is that Connecticut is an expensive place to live and it’s becoming more and more expensive.”

During discussion on the resolution, Town Council Democrats advocated for a “wait and see approach” while saying there were too many unknowns.  “We don’t know where the tolls will go if tolls will come here,” said Gina Cekala (D – At-large).  “I am not completely against tolls…”

Showing some frustration, Councilor Cressotti continued, “The way this was brought upon us was incorrect.  We should have all been involved…  It’s a pre-mature vote.  We’re voting on something that doesn’t exist yet.” 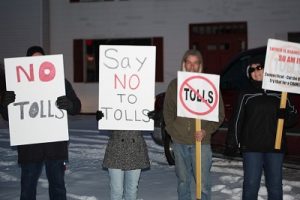 In response to Councilor Cressotti’s comments, Joey Bosco (R – Dist. 1) replied “You can talk about not being involved… all we hear is talk.  This resolution’s been out for three weeks… four weeks?  We held it off and there were no other things brought up on it… You guys could have done whatever you wanted to add, subtract… but you did nothing.”  Councilor Bosco continued, “If we don’t at least stand up and at least let it be known how we feel you’re not doing anybody any justice,” said Councilor Bosco.  “All it is is saying we don’t want tolls in the State of Connecticut.  By not even saying that, (it says) you want them.”

Carl Sferrazza (R – At-large) certainly seemed to do his homework.  In response to public comments made pertaining to controlling costs, “It costs $497,659 to construct one mile of road.  And it costs us $99,417, it’s the highest administration cost in the entire country,” said Councilor Sferrazza.  “As a (Town) Councilor, I feel obligation to look out for the citizens of this town.”  Sferrazza continued, “We know that last month, Senator Alexandra Bergstein (D – 36th Dist) out of Greenwich, CT introduced Senate Bill 102 (for Tolls) and that has already been lodged up at the Legislature.   And we also know that Governor Lamont campaigned that tolls would be restricted to trucks.  And we do know now that three days ago he’s changed his mind on and that and now it’s going to expand to cars.”

The vote took place following a rally, at the corner of Rt. 5 and Elm St., where concerned citizens braved the cold to spread their message against tolls.  All major Connecticut broadcast news services covered the rally. 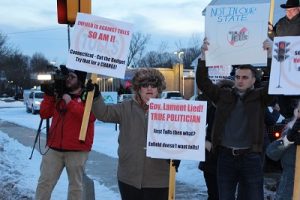 “This is just Malloy (version) 2.0,” said Mary Ann Turner.  “It’s really disappointing to me because (Governor) Lamont said ‘Hey, I’m going to be different’ and he sure proved himself to be exactly the same…  People are going to go around the highway because it’s just a mileage tax.  People aren’t going to be able to afford that $500 or $600.”

Broadcasting live on Facebook, State Senator John Kissel (R – 7th Dist) shared his reasons for opposing tolls.  “I’ve been campaigning against tolls for years.  Our roads and highways are not designed for toll… It’s essentially a mileage tax and we don’t need hundreds of millions of (more) dollars taken out of Connecticut taxpayers’ pockets,” said Sen. Kissel.  “The people I talk to… to pay money just to go and from work?  It’s crazy.”

“I’m pleased a majority of the Town Council was proactive,” said Chris Rutledge. “Tolls are just another way for Governor Lamont and the Democrats to categorize Connecticut’s financial woes as a revenue problem.  Spending and costs are what need to be controlled and until they are, tolls and other taxes are just going to exacerbate the problem.”