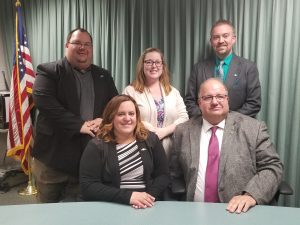 On the evening of February 26th, the Enfield Board of Education met to (among other things) approve the 2019-20 school calendar, hear from students attending leadership programs and present ideas for improving our students’ educational experiences as well as concern over legislation coming down from the State.

Expressing concern over legislation to force regionalization and pass the cost of teacher pensions onto the Towns, Board Member Chris Rutledge suggested extending an invitation to Enfield’s legislative delegation.  “We need to understand what’s coming from Hartford so we can make informed decisions,” said Mr. Rutledge.  “These bills could have financial and organizational consequences for our district and that could negatively impact our ability to give our children all the educational opportunities they deserve.”

Chairman Walter Kruzel indicated, in his comments, that an invitation had been extended to Enfield’s State Legislative Delegation and they should be present during the March 26th Board meeting to answer questions about these bills and their potential impacts on Enfield Schools.

“We need to know who we are and what needs we serve,” said Vice-Chairman Charlotte Riley in her comments.  “This is a prime example of why the proposed bill to regionalize schools would not work for Enfield… When you regionalize five or six towns together, you aren’t going to be able to cater to the needs of each specific group you have within the school.”

Students from Enfield’s 4th Grade classes and members of the High School’s diversity and student leadership groups also presented about their experience at the CAS Elementary Level Student Leadership Training Conference held at Asnuntuck Community College.  These students were provided with an opportunity to develop skills needed to be effective leaders within the school community.  During the conference, they participated in activities designed to foster these skills through productive thinking, decision making and communication.

“Enfield’s a better town because of each and every one of you,” said Board Member Rich Regnier.  “So thank you for being part of this.”

The school calendar for the 2019-2020 school year was also approved.  Similar to the 2018-2019 school year, the first day of school will be the Wednesday before Labor Day.  This change was implemented in response to weather-related school closings elongating the 2017-2018 school year.  By starting the school year a little earlier in concert with implementing 3-hour delays (to which, as reported by the Superintendent, the response has been “overwhelmingly popular”), the Board of Education has taken well-reasoned steps to minimize the potential for a school year extending into late-June while ensuring students receive all the classroom time they need.

In Vice-Chairman Riley’s comments for the evening, she also expressed concerns about the financial impact of bills coming out of Hartford.  After reviewing Governor Lamont’s proposed budget, Mrs. Riley reported that “There is definitely going to be an 8% increase this year from CREC.”  Later in response to a question, Mrs. Riley (who also is Chairman of the Finance Committee) said she would work to quantify the financial impact.  Regarding the shift of a portion of teacher pensions, “It’s concerning because it’s more funds that we have to allocate, and it raises a whole new set of variables and questions.”

Mr. Rutledge also brought up some ideas for providing real-live civics learning experiences.  “I’d like to see our students have more opportunities for learn about local government, potentially through job shadowing programs at Town Hall,” explained Mr. Rutledge.  “This could be another way Enfield Schools fulfill their responsibility to make a difference in children’s lives by providing some real-life experience and insight into how government works.”

The next meeting of the Enfield Board of Education is on Tuesday, March 12th at 7PM in the Town Council Chambers of Enfield Town Hall (820 Enfield Street).